This volume presents a series of original theories formulated over Dr. Henry Kellerman’s more than 50 year career first as psychologist, then as psychoanalyst. These are theories reflecting phenomena both in the natural as well as social sciences. They are foundational theories, several of which were published in scientific and clinical journals, as well as in books.

Category: Henry Kellerman SKU: N/A
Share this book
Share with FacebookShare with Google+Share with TwitterShare with LinkedInShare with PinterestShare with WhatsApp

The seven theories formulated and presented here are:

1) The entire nightmare domain as it relates to dreaming and to the various facets of emotion and personality; a formulation able to account for all possible nightmare contents with respect to only a few named basic nightmare categories.

2) The transformation of the apparent circular shape of the micro-group (the therapy group) into its actual physical (hidden) shape. This assumes that an ideal group composition based upon an arrangement of ideal or basic diagnostic forces (and basic emotions).

4) The psychoanalysis of symptoms: revealing a four-step symptom-code that within a systematic talking procedure demonstrates how any symptom within a distinct class of emotional/psychological symptoms, can be understood and unraveled − cured.

5) Parkinson’s disease: implications of the prosody of speech−specifically, the role of ‘vocal resonance,’ with a focus on vibration, in the appearance and treatment of initial Parkinsonian symptoms.

6) The discovery of God: A psycho/evolutionary perspective in which God is seen as discovered by virtue of a hard-wired genetic program defined not as a God-wired genetics, but rather as a hard-wired need for security, balance, peace of mind, the expectation of fairness, and a sense of empowerment.

7) Revealing the code to understand unconscious communication (its algorithm) and identifying the specific primary themes that govern each person’s unconscious thematic objective. The underlying primary theme will tell us what the person wants (or wishes) no matter what the conscious message (content) seems to be. Thus, the algorithm contains an infrastructural composition based upon: wishes as the most derivative agent of the pleasure principle; these wishes underpinned by the epigenetic primary emotion system etched in the bases of DNA; and, all of it bundled in the form of a schema.

Watch these two short videos, where Dr. Henry Kellerman talks about his upcoming book and his major contributions in the theory of nightmares, group therapy, DNA properties of basic emotions, and his theory of how to cure psychological symptoms.

Get a taste of this fascinating volume:

In this volume I will present a series of original theories formulated over my more than 50 year career first as psychologist, then as psychoanalyst. These are theories reflecting phenomena both in the natural as well as social sciences. They are foundational theories, several of which I’ve published in scientific and clinical journals, as well as in books. It is not my intent to include these here as a testament to their validity or truth. My one guiding principle in all of these formulations was that whatever the theory − that is, its nomological network, its correlational matrix − it needed to be a prototypical example of the usual scientific basis for considering any theory not just valuable, but also powerful.

This principle that defines any theory as powerful may be expressed as follows:    The most powerful theory is the one that accounts for the greatest subject/domain-variance (its subject matter) with respect to the fewest number of variables.

Such a principle means that the theory needs to be able to organize most or all of what exists in any specific content-domain only by utilizing a few − three or two or perhaps even one variable. In other words, the fewest variables that are utilized to account for the greatest amount of variance (material in that domain) is usually considered the most powerful theory.

I believe this is what I have done in each case with respect to these formulations. I have attempted to identify the fewest number of variables that perhaps can account for the greatest variance of these respective domains.

Formulating such material was an endless source of joy. Thinking through and synthesizing a fund of knowledge from disparate intellectual and research arenas, and having feedback from clinical and university publishers who consented to publish the material was, simply put, thrilling.

The seven theories I’ve formulated and presented here are:

In formulating and developing theory regarding the nightmare and personality, the transformational shape of groups, and emotional correlates of DNA, I have utilized specific elements of the psycho/evolutionary theory of emotion postulated by Robert Plutchik (1962, 1980, 1994). Dr. Plutchik and I published the Emotions Profile Index, a paper and pencil index that quantifies a subject’s emotions profile along the dimensions of the eight basic emotions (1974). These named primary emotions were derived by Plutchik on the basis of identifying such emotions with the basic prototype patterns of behavior that can be attributed to, and observed in organisms at all phylogenetic levels − from amoeba to man. It was Plutchik’s genius that enabled the creation of criteria that revealed which emotion is or is not primary.

Plutchik and I also published the first repository series of five edited books on the entire range of emotion theories covering a wide variety of scientific domains. These volumes also were represented by biological, behaviorist, brain, psychoanalytic and learning theory scientists (Plutchik & Kellerman, 1980, 1983, 1986, 1989, 1990). As coauthors, we also published many papers in scientific and clinical journals (Kellerman & Plutchik, 1968, 1977, 1978).

The seven original theories presented here are my responsibility. However, the foundation of the Plutchikian work on emotion gave me a spectacular vantage point that for the first time enabled me to relate my general psychoanalytic orientation with specific clinical material in order to synthesize an abundance of data regarding personality levels and their vicissitudes − the various concatenations of personality − and to then see it all in a parsimonious way. Such was the opportunity that further made it possible for me to also synthesize material on the nightmare and the structure of personality, on the transformational shape of groups, on the understanding of unconscious schemas, and even on the emotion correlates of DNA. I am forever indebted to Dr. Plutchik, who for me was teacher and scientist, colleague and friend, and brother.

Other luminary figures of my professional life, from my clinical psychology doctoral work and psychoanalytic postdoctoral training included: Dr. Lucille Blum, Dr. Max Geller, Ms. Deborah Hample, Dr. Harold Leopold, Dr. Emanuel K. Schwartz, and during my earlier formative training years, my dear Mrs. Eleanor Wimble. Again, I am very much indebted to these stellar clinicians who were outstanding as teachers and supervisors, and also as colleagues and friends. And, in the sense of continuity, I, too, have mentored many students over the years so that the vital tradition of collaboration, supervision, and instruction enabled me to enjoy transmitting these same values to many others regarding the excitement of thinking through new and potentially important ideas which then in turn also had the effect of encouraging these others in their work.              In addition, my professional and publication collaboration with my friend and colleague Dr. Anthony Burry resulted in several books published. Our diagnostic book appeared in four separate editions spanning a 17 year period from 1981 to 2007 (Kellerman and Burry, 1981, 1991, 1997, 2007), and our two-volume set on psychopathology covered the history and development in the understanding of psychopathology (in volume one), as well as a review and inherent psychodynamics of diagnostic nosology (in volume two, Kellerman and Burry, 1988, 1989). Our collaboration was always spirited, endlessly interesting with respect to our kindredness and intellectual interaction and in each instance a gratifying and rich experience. Thus, even after more than 50 years in the field of mental health, the important people – in this instance, those in my professional life − apparently, are forever etched in my memory as those with whom I’ve shared rich experiences that have been time-tested and that have never receded. They remain vivid.

This book then is a scientific memoir from which of the books I’ve published as well as including my clinical and scientific papers published in professional journals, as well also as chapters in edited books (and in addition to scores of conference presentations), I am selecting only those that in my opinion qualify as bona fide original formulations that I personally have made − original foundational theories that may individually constitute, and as a whole comprise a body of work, that hopefully make a contribution to the intellectual symposia on the growing edge of these respective domains.

Although at first glance these seven presentations may seem disparate in content, nevertheless in the Epilogue of this volume I will attempt to show that there is a consistent underlying thematic strand that winds its way through all seven − underpinning my understanding, insight, and synthesis − and that enabled each of these domains to be thought through, worked on, and to whatever extent, realized. The key to this thematic thread that underpins it all, concerns the operation of a clutch of variables including: the emotion that makes the world go ‘round (it’s not love). Included in this clutch of variables are: wishes; issues of empowerment and disempowerment; repression; and, the emotion that truly makes the world go ‘round − anger − its management and its vicissitudes. Anger is the primary emotion with the most extensive code-word glossary, e.g. dissatisfaction, rage, fury, resentment, annoyance, irritability, quarrelsomeness, loathing, contemptuousness, hatefulness, inconvenience, impatience, etc., and the three second-place most coded anger terms – “being upset,” “feeling anxious,” and “being frustrated.” Anxiety, it is proposed emanates from feeling disempowered leading then inexorably to either feeling angry (if the anger is not repressed), or feeling anxious (if the anger is repressed). And finally, the single most oblique, opaque, disguised, concealed, hidden, masked, veiled, cloaked, and maximally coded term for anger is revealed as − “stress”. For the most part, it is the issue of the operation of the emotion of anger and its vicissitudes that seems to be implicated in almost everything concerned with psychopathology. In this particular work that I’ve titled “consilience” (unity), this entire issue of anger and its effects emerges as a concept accounting for a great deal of the variance in the widest range of foundational theories here presented. 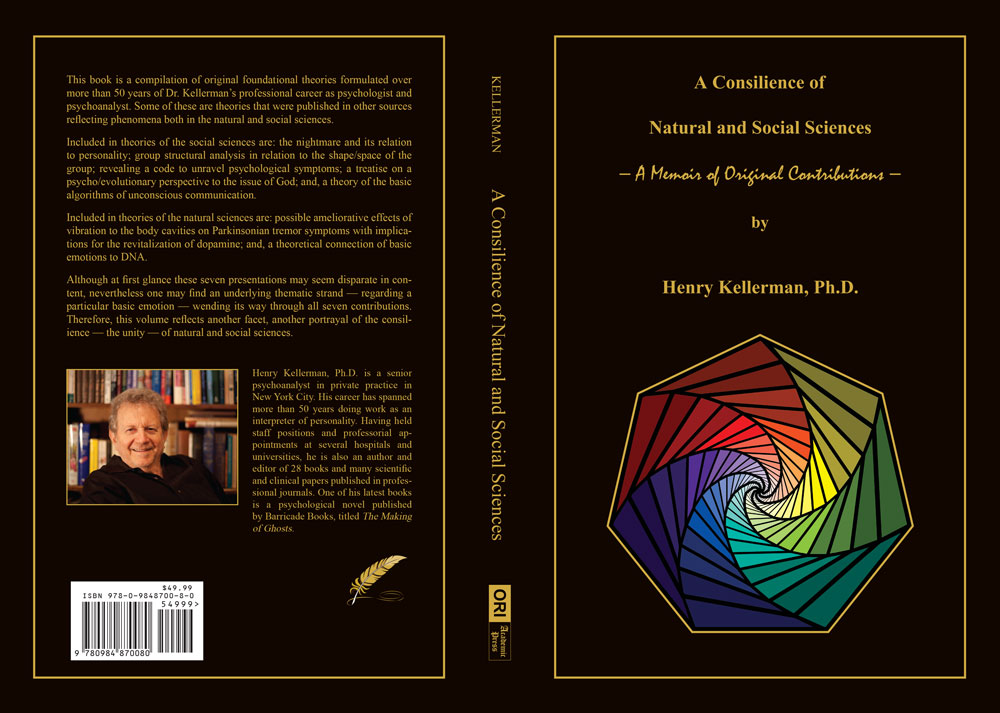