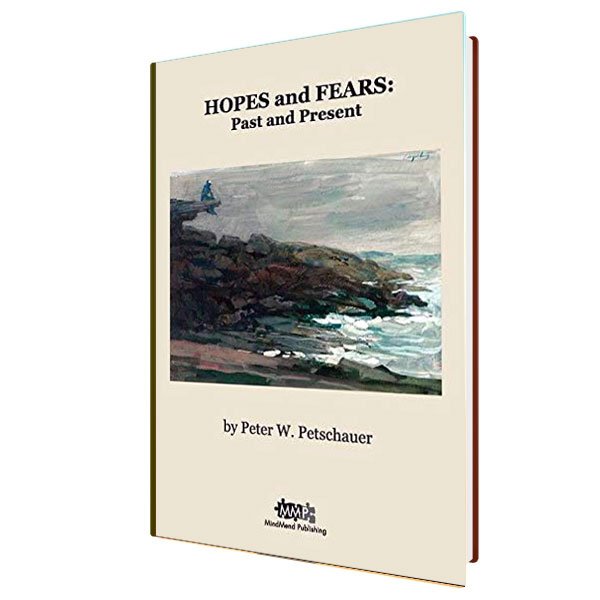 Hopes and Fears: Past and Present

In his new book of poetry, Peter Petschauer is an astute observer and chronicler of the human condition – his topics range from the horrors of the Holocaust to the tender delights of being a grandfather. These poems will make one cry, laugh, and marvel at how skillfully Peter Petschauer handles the joy and sorrow of his own life and the lives of his World War II contemporaries in Europe and in America. There is no sentimentality, no preaching, just the power of the best words possible chosen to paint vivid pictures of the human condition at its most raw and most beautiful.

Petschauer arrived in the U.S. in 1957 at age 17 and almost immediately set out to continue the education he had started in Europe and obtained B.A., M.A., and Ph.D. degrees in European and Russian History at New York University. He taught European history at Appalachian State University in Boone, NC from 1968-2006. In addition, he led several programs, including the university’s faculty and staff development center and headed Appalachian’s Faculty Senate and the UNC system’s Faculty Assembly.

He published and presented widely both nationally and internationally. His Der Vater und die SS [The Father and the SS, 2007] is now out of print, but it explored his relationship with his father. The struggles during the 20th century of the women in Italy and Germany whom he calls his mothers, is a historical exploration of their courage, steadfastness and care for their families and him. It is titled In the Face of Evil (2014) His novel, A Perfect Portrait (2016), explores the joys and difficulties of a very talented young woman in the eighteenth-century Germanies to become a professional artist. Last year’s book (2019) features a selection of his most recent poems. They range from the personal to the political. This year (2020) he made available An Immigrant in the 1960s. Finding Hope and Success in New York City. The title says it all.

Hopes and Fears: Past and Present is an extraordinary poetic collage covering the hopes and horrors of the eras of the times of Hitler to present. It is also a poetical psychobiography of a an empathetic and special human being whose life spans two centuries, friendships cover two continents, and erudition borders on being limitless.

Peter Petschauer is a poet of remarkable talent. His topics range from the horrors of the Holocaust to the tender delights of being a grandfather. The poems made me cry, made me laugh, and made me marvel at how skillfully he handles the joy and sorrow of his own life and the lives of his World War II contemporaries in Europe and in America. There is no sentimentality, no preaching, just the power of the best words possible chosen to paint vivid pictures of the human condition at its most raw and most beautiful.

Petschauer’s poetic works are like threads in a fine tapestry. He is a consummate weaver of words.

In his new book of poetry, Peter Petschauer is an astute observer and chronicler of the human condition – from his family during and after Nazi Germany – to portraits of individual people. His use of free verse and narrative poetry takes the reader behind Petschauer’s eyes and ears and into his keen mind and compassionate heart. Readers of Petschauer’s poetry will know the world – and themselves – differently from before they read his book.

HOPES AND FEARS by Peter W. Petschauer
REVIEW
A remarkable book of poetry written by an American Professor of history, esteemed international historian and scholar. Petschauer doesn’t simply report what has occurred, but also examines the why of it, through his studies and accomplishments as a psychohistorian.
A whirlwind trip that will take you from an unusual family life, which at different times had the author with three women as his mothers who lived through the horrendous, unthinkable time of Nazi Germany, some on farms some in cities, all committed to keeping him alive. Then a sweeping move to sweet smellng gardens, to thinking, feeling trees, to becoming a loving grandfather, to New York streets with elegant women and a dire warning about the present. All this set in a creative rhythm that dares your eyes to leave the page.
In his section entitled It Could Get Worse, his unforgettable words should be burned into our brains: “They said it won’t happen here; this is a democracy. We told them that it happened before-in a democracy.” Never forget.
A thinking person’s tale told by a mental giant. This book will accompany you through many emotions and deliver a new startling awareness. It deserves a place on your bookshelf to be read more than once and shared with others.
Delivery was completed in record time.

The Author as Subject

For the Good Times

It Can Get Worse