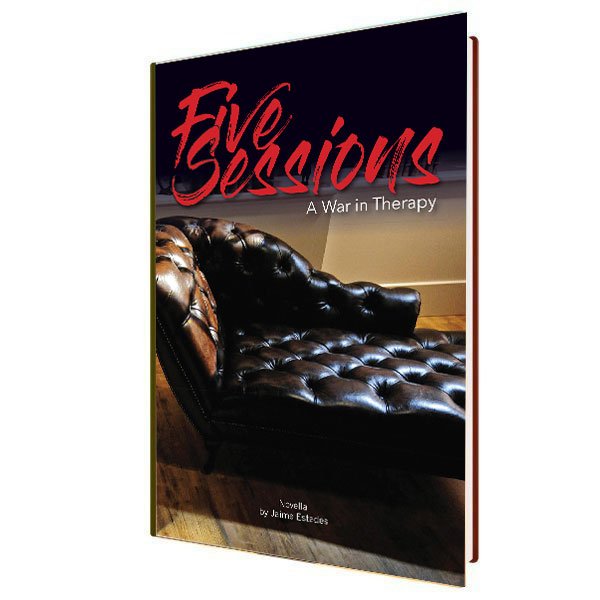 Who of us has not been curious about what takes place between therapist and client? This novella offers much more. James Estades cleverly interrogates the possibility of class biases in psychological theory in his novella Five Sessions.

Christine Adams, an idealistic recent Columbia University graduate from a wealthy West Side New York City family, goes to work as a therapist in an East Harlem non-profit care center. Of course she wishes to “succeed“ in her first case: that of a 59 year-old superintendent of a high rise West Side condominium who has attempted suicide three times. She wants this case because it is the most interesting of the cases she is offered on her first day on the job.

Her client, however, Vidal Estrella, is a much more recalcitrant and complicated client than she bargained for – a 70’s era social activist, the champion of several lost causes, well read, better educated than he admits, and despairing on a level the 24 year-old can only learn to understand. It is he who asks her the story’s key question, “Would slaves in the South have felt better about slavery if they had had therapy three times a week?”

In the end, the story is, for Adam’s its narrator, the account of a major disaster. But it’s a disaster from which she grows, albeit painfully. She winds up, paraphrasing Estrella’s question in her own way. “Now I know we live with a pathology that will never be taught in psychology class.” An excellent read for anyone, therapeutic professional or lay person, interested in human communications, social and racial, conscious and unconscious.

Jaime has committed his life to advocacy, education, health and leadership training. For the past 35 years, he has been working on issues relating to education, immigration, housing, voting rights and registration and family entitlement issues. Estades is the Executive Producer of the documentary “Let My People Vote,” which chronicles the 2016 Presidential election in Orlando, Florida.

Jaime has also used his expertise to bolster the work of key nonprofits, including the Boriken Neighborhood Health Center’s development of the first eco-friendly (Green) Health Center in East Harlem. Jaime organized 250 families against the Los Sures Development Company, one of the worst landlords in Brooklyn. As Director for Advocacy for the Alliance for Quality Education, Jaime built, managed and coordinated coalitions of sixty community-based educational and labor organizations to improve the quality of public education in New York City. In 1996, during the Presidential election, as Executive Director of the Hispanic Education and Legal Fund, Jaime spearheaded the nonpartisan registration of over 100,000 new voters in New York, New Jersey, Pennsylvania, Massachusetts, Connecticut, Ohio, North Carolina and Florida.

Five Sessions captures the failure of well-meaning psychodynamic interventions for people who have been traumatized in living within and under racist institutions. The struggling new therapist attempts to listen to her client’s years of pain created by racial trauma, but has no context to hear this, as she has lived in a separate world. Five Sessions show that without understanding and investing in societal justice, psychotherapy will remain only useful to the privileged worried well.

One cannot stress enough the importance of reading and/or seeing Five Sessions. Unintended covert racism and cultural biases become extremely apparent as the characters interact with each other over the five therapy sessions. While watching Five Sessions, the play, I began to witness biases in myself that I never saw before, and I was able to better understand systematic racism. Afterward, with reflection and action, I begin to shift my internal lens. I truly believe that I am a much more empathic, sympathetic and understanding human being due to the impact of this play.

Jaime Estades creates moving pieces that capture your attention and build opportunities for critical conversations. His stories are honest, with fully developed, complicated characters staying true to the realities of our lived experiences. As a social worker and a thoughtful educator, his advocacy comes from the heart and he is a steadfast collaborator in justice-based practice.

Jaime Estades’s work Five Sessions is a phenomenal artistic expression which speaks to our present chaotic times. A careful examination of our collective history and karma in this moment, Five Sessions reflects a repetitive nature of illness and tumultuous times centered around the erosion of humanity due to violations of power and privilege. To consider what really ails our society, from the perspective of the marginalized is often not analyzed from a perspective of power, race, and privilege, but from a place of their limitations, inferiority, and burden. Five Sessions begins to dismantle oppressive systems by pushing critical dialogues through the therapeutic relationship of a white female therapist and her brown Latin X male client. These dialogues are necessary to mental health and all helping professions if they are to truly provide healing in ways that uplift communities’ dignity and holistic health. These dialogues are also needed by the water coolers, in conference rooms, PTAs and at the dining table, if we are ever going to be able to heal from our past and collectively face our current circumstances. Felicidades to Jaime Estades for his passionate attempt to challenge us and move us closer to a better world.