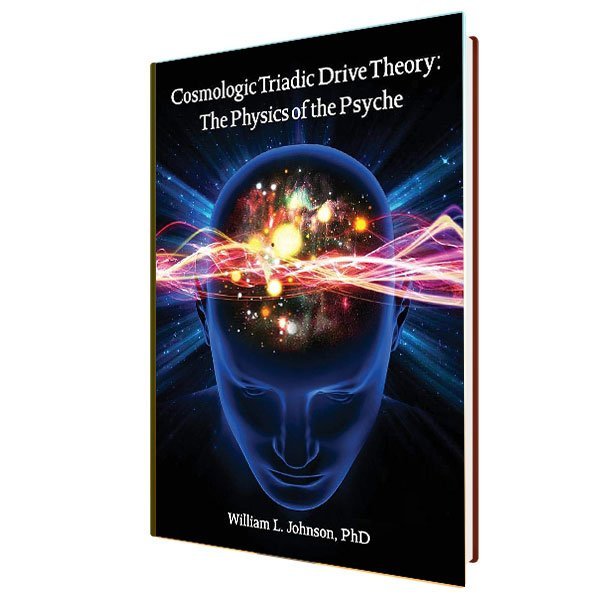 Cosmologic Triadic Drive Theory: The Physics of the Psyche

Cosmologic Triadic Drive Theory: The Physics of the Psyche is the work of late Dr. William L. Johnson that introduces the reader to the Triadic Drive Theory (TDT), which explains how the forces of the universe create our mentality. It begins from a different reality – about the nature of human beings – than has been commonly held by psychology and psychoanalysis. TDT’s initial proposition is that the constant forces of physics throughout the universe, and in the operations of subatomic particles in the atoms of our brain cells, produce the energy of our two most basic life-determining psychic drives, construdo and destrudo. Construdo is the drive that helps us to combine and connect thoughts, ideas, emotions, concepts, attitudes, and beliefs, as well as to connect with other cultures, societies, families, and people. The second drive, destrudo, determines why, when, and how such unions are broken apart, damaged, or overthrown. It is proposed that these two drives and their derivatives determine more human behaviors than Freud’s libido drive and its derivatives. Triadic Drive Theory asserts that the forces of physics that govern and hold the universe together constitute the true universal reality for humans, as well as for all other species. Thus Dr. Johnson proposes an axiom: the universe and the humans are governed by the same principles of physics. So, the focus of this theoretical and psychoanalytic endeavor is about how these forces of physics produce our cognitive or mental drives. In this book, Dr. Johnson offers application of TDT to clinical practice, including Freud’s “dream work,” psychopathology diagnosis, object relations, and work with couples, while adding the physical dimensions of time and space.

Dr. William Johnson has given us a tour de force ─ a bona fide original conception taking Freud’s psychoanalysis to a profound, daring, and significant step further. This Johnson’s work, Triadic Drive Theory, is such an example of what happens when a scientist/clinician opens our eyes to a new and perhaps fantastic idea. Copernicus did it in his heliocentric discovery, by demonstrating that it is the Earth that revolves around the sun, and not the other way around. Darwin did it by demonstrating that evolution ‘evolves,’ so that it is characterized by a past, a present, and a future, and therefore that Homo sapiens has a relation even to the amoeba! Freud also gave us this kind of challenging gift, in a nutshell telling us that we may not even know our own minds, and therefore that the meta-psychology of psychoanalysis can give us access to such mentation and to all of its vicissitudes. Similarly, in an important way, Johnson challenges us to see that Freud, in fact, was right to unfold psychoanalysis into biology; but perhaps psychoanalysis must by all means be taken even more fundamentally ─ down to physics! And that is what Johnson has done here. He has not only opened the door to suggest the connection of psychoanalysis to physics, but has spelled out this connection highly specifically, by offering us the “updated” drive theory. After reading this work, one cannot come away without feeling a cluster of emotions and characterizations. These include characterizations such as “fascinating,” “audacious,” “unprecedented,” “courageous,” “ground-breaking,” and yes, along with all of this, a final epiphany revealed about Dr. William Johnson himself (in his “mad” pursuit for scientific truth) ─ a piece of genius.

How is our mentality created? How does the human mind develop? Are there any natural or super-natural forces present through one’s life that shape this person’s (material) brain and (non-material) mind/ psyche? Are the material brain and non-material mind connected in some way, and do they change each other as they operate, even from before birth? Are both the brain and the mind of one person connected in any way to the minds and brains of others? All these are the fundamental questions that great people of the 19th and 2oth centuries explored, and now, in the 21st century, their followers continue this endeavor. So, this volume, by a brilliant psychoanalyst Dr. William L. Johnson, offers some answers to the above questions, examining them through the lens of the Triadic Drive Theory (TDT), which explains how the forces of the universe create our mentality. Triadic Drive Theory is built on Freud’s dual drive theory, which relies mostly on biological concepts, but in this work, Dr. Johnson uses the laws and the language of physics, cosmos and the universe to explore one’s mental life and one’s relationships. 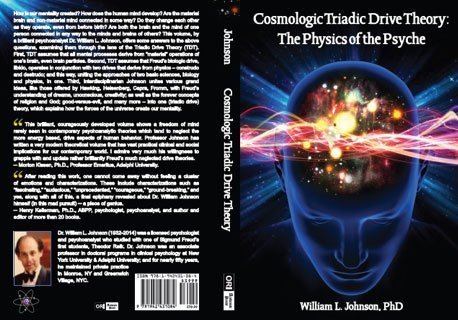